Running the No-Fly-List app inside an Enclave

This guide will walk through running the No-Fly-List app, which checks passengers attempting to fly on an airline against a no-fly list. It’s a fairly simple Python application that requires protection “in-use” for it’s data, because we don’t want anyone to be able to see the full no-fly list. The app uses a secure enclave and Amazon KMS to achieve that. 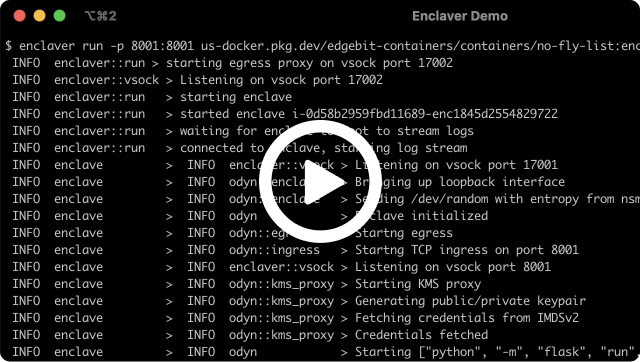 In the recent past, there was an incident – this is a rumor – that caused the entire cast of Sesame Street to be added to the no-fly list. We can find out if that’s true :)

For this example you’ll need an EC2 instance with support for Nitro Enclaves enabled (c6a.xlarge is the cheapest x86 instance) and Docker installed. See the Deploying on AWS for more details.

On startup, the app fetches an encrypted blob from S3. This blob is encrypted with a scheme called “envelope encryption”. Let’s take a quick detour to understand it, because it’s both interesting and really useful.

Envelope Encryption involves encrypting our data twice, once at the app-level with key A, and then encrypting key A with key B. In our app, we have the data that was encrypted with key A (the data key), and an encrypted version of key A. This is our “envelope”, because we’ve wrapped our data with the second level of encryption using key B (master key).

Functionally, this means we’ll have two layers of encryption, the first is encrypted using AES with a key unique for each sensitive item and then the unique keys are encrypted by a master key that is stored in AWS KMS.

Here’s what the actual envelope used by the app looks like:

Inside of the enclave, we have a policy that allows us to decrypt the data key. Since it’s recorded in the file, it’s easy to know which one to request from KMS. When we get that, we can use it to decrypt the main part of our file.

While we don’t explore it here, the powerful part is that we could locally decrypt large or numerous files without having to transmit the ciphertext through KMS, because we have the plaintext data key already. The isolation guarantees of the enclave make it safe to cache the plaintext data key, unlike if you were keeping it in RAM or on disk in a regular VM.

Hope you learned something! Let’s jump into deploying our app.

Enclaver builds enclave images based on a configuration file, which specifies the container that holds the app code, the network policy for egress, and a few other details. This policy is packaged into the image because it is distributed with the image and included in its cryptographic attestation.

It’s pretty straightforward. The sources.app parameter specifies the source container for our code. Since we’re using AWS KMS for cryptography and S3 for fetching our encrypted no-fly list, those addresses are allowed. The IP address is the AWS instance metadata service, which grants dynamic credentials to use for the KMS and S3 requests.

enclaver build takes an existing container image of your application code and builds it into a new container image with enclave-specific components added in. This is what we’ll run on our EC2 machine. This image can be pushed to a registry like any other container.

We’re passing in our manifest file from above to the build:

enclaver run executes on an EC2 machine to fetch, unpack and run your enclave image. First, SSH to your EC2 machine:

After the image is fetched, it is broken apart into the outside and inside components. The outer components are started first, then the enclave, with the inner components inside, is started.

Note: you must use the container image shipped by EdgeBit for the demo to work correctly. The build above is shown for educational purposes but your build will cause the PCR measurements to differ from the key access policy.

We will start it manually using Docker, but you can also set up a systemd unit.

Check to see that the enclave was run successfully:

Now the fun part. Let’s see who can fly and who can’t. Remember, a key part of this scenario is that no one should be able to see the complete no-fly list, but we should get back an answer for each person when they buy a ticket.

We know that members of Sesame Street might not be allowed to fly. Test it out for yourself from the EC2 machine:

See how many names you can discover that won’t be flying today.

The beginning of the guide discussed how the crypographic attestation is used to protect the key. This configuration happens within AWS KMS on the key access policy. The policy for the No Fly List app uses the PCR0 measurement, which measures all of the enclave code, so it represents the most holistic measurement of our enclave image.

Enclaver’s KMS integration attaches the full attestation to KMS requests automatically. The measurement for PCR0 gets used in the policy like this:

If you booted a c6a.xlarge, the full machine has 4 vCPUs. By default, Enclaver dedicates 2 of those to the Nitro Enclave. Dedicated CPUs are part of the isolation and protection of your workloads in the enclave.

You can test this out by running top and then hitting 1 to show a breakdown of CPUs. Notice that CPUs Cpu1 and Cpu3 are missing here:

Check out the Code

This application is on GitHub: https://github.com/edgebitio/no-fly-list/blob/main/server.py

Once you factor out the S3 fetching and the boilerplate KMS handling, our actual logic is just a handful of lines that is easily audited. This is the ideal type of enclave app. It’s focused, simple and acts like a secure sidecar to the rest of our app.

This example walked through running a simple Python app that represented running a specific microservice or a security-centric function within an enclave. It’s also possible to run an entire application in an enclave to wrap it in a higher level of security.

Check out running Hashicorp Vault for a walkthrough.